We have released the first episode of the new bi-monthly (fortnightly) exclusive Seeking Alpha podcast! This podcast is the first to be exclusive to Seeking Alpha ever so, please check it out and let me know your thoughts.

Earlier today Russian Energy Minister Alexander Novak announced that Saudi Arabia had suggested production cuts by each OPEC member of approximately 5%.  Due to these claims oil spiked at the beginning of the trading day however, due to conflicting reports from the Saudis oil gains slowed but still ended the day up $0.92 as hopes of a OPEC reduction deal remained strong.  For more information click here

Iran Dives Back Into the International Marketplace:

Iran’s President recently signed an outline order with Airbus Group for a total of 118 jetliners as well as an accord with PSA Peugeot Citroen regarding the modernization of a car plant in Tehran.  The total price tag, according to Bloomberg calculations, was approximately $33 billion.  Iran’s central bank estimates that the lifting of international sanctions will result in approximately $50 billion a year in foreign investments.

Xerox to split, Icahn to get 3 board seats at one of them: DJ (CNBC)

In a statement today the Federal Reserve of the United States announced that they will not be raising interest rates due to slowed US economic growth.  For more information click here for BBC and here for the Guardian

According to sources questioned by Japanese news agency Kyodo News, North Korea may be preparing for a long-range ballistic missile launch test.  This comes just weeks after North Korea claimed to have successfully detonated a hydrogen bomb.  However, experts believe that an atomic bomb test was conducted; technology which North Korea is already known to possess.

A China bank contagion could blow up global markets (CNBC)

The American Petroleum Institute reported today that crude supplies increased by 11.4 million barrels for the week of January 22, 2016.  Tomorrow the more significant EIA report will be released.  Meanwhile, as shown above, the price of oil still ended the day up $1.11 a barrel.

Conflict in the Middle East:

Today Syrian government forces recaptured a “strategically important” town in southern Syria.  Syrian’s government forces have made significant gains during the recent weeks as Russian airstrikes continue to destroy their opposition.  As President Assad’s government continues to further entrench itself with military victories and the West and its allies remain steadfast in their demands for President Assad to step down the future of Syria remains frighteningly in the shadows.  For more information click here

Escalating US and Russian Tensions:

Hewlett-Packard has announced additional cuts to its workforce as it moves ahead with the plan to split the company.  The reasoning behind the move is additional savings of $2.7 billion annually as the company attempts to turn things around.

Greece’s Prime Minister, Alexis Tsipras, announced today that on Thursday he would resign.  This is a move that should cause concern among European Leaders as the future of the recently agreed upon bailout once again becomes shaky.

Tensions have mounted on both sides of the demilitarized zone as North Korea fired a rocket at South Korea prompting them to fire back with an artillery barrage.  Today North Korea threatened to “start a military action” unless South Korea ceases all propaganda broadcasts and removes their loudspeakers within 24 hours; something South Korea is not likely to do.

Oil ended the day at a six year low due to a surprise increase in United States crude stockpiles.  The Energy Information Administration announced that crude supplies rose 2.62 million barrels last week compared to analyst estimates of a 820,000 barrel decline.

Greece will receive the first installment in its new bailout package of 13 billion euros on Thursday as well as 10 billion euros set aside for the banks.  The deal was finalized Wednesday as lawmakers in Germany and the Netherlands gave their approval.  For more information click here

The Federal Reserve meeting minutes showed that the Fed believes it is not time to raise rates.  The minutes said that the Fed would like to see greater improvement in the jobs market before they increase rates but that the job market is almost ready.  For more information click here 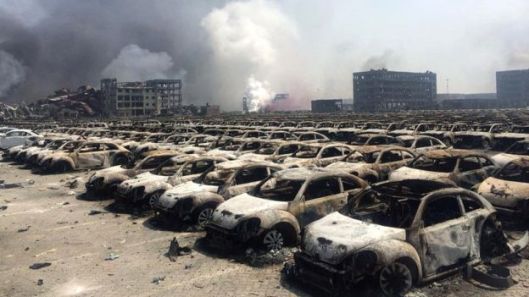 The Chinese State controlled broadcaster China Central Television announced that a shipment of explosives had detonated.  However, like all news that comes out of China this cannot be independently verified.  The truth is we will most likely never know what happened on Wednesday.  For more information click here

For the rest of today’s earlier news click here